The Islands of Japan – an overview

The Main Islands of Japan


Although Japan has more than six and a half thousand islands, the vast majority of these are extremely tiny and uninhabited. In fact, there are only four main islands in Japan, and these are where the vast majority of the one hundred and twenty five million Japanese people live.The largest of these four major islands is Honshu which has the largest percentage of the Japanese population. This is perhaps not surprising as Honshu is home to Japan’s capital city, Tokyo, which has a population of around thirteen million people. Other features of the island; the seventh largest in the world, is that it is home to Mount Fuji, one of Japan’s best known landmarks. The islands main industry is agriculture, especially rice growing, fruit growing and fishing. 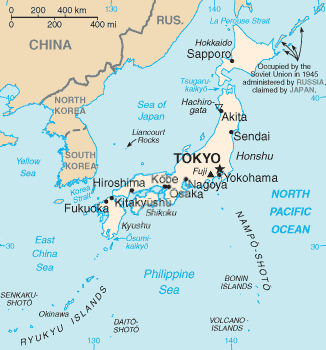 The next largest Japanese island is Hokkaido which is situated in the north of Japan. It is separated from Honshu by the Tsugaru Strait, however, those, wishing to travel between the two islands can do so by the underwater railway Seikan Tunnel. This is a mountainous island with several active volcanoes. Because of its northern location, Hokkaido can be bitterly cold during the winter months and is cooler than the rest of Japan during the summer.

Kyushu is the third largest Japanese island and has a total population of around thirteen million people. Like Hokkaido, Kyushu has its fair share of volcanoes, but also has several hot springs which are very popular with Japanese tourists. The warmer climate of this island means that it is very productive and many different types of crops such as rice, sweet potatoes and tobacco are grown on Kyushu. Kyushu is also a wonderful place to visit, especially if you find cheap hotels on Kyushu.

The smallest of the four main islands of Japan is Shikoku which has a total of around four and a half million people, only a third of the next largest island. Included in the boundaries of Shikoku are many small islands which lie just off its coast. Its terrain is mountainous in the south, but also has a large area of lowland plains. As it has a similar climate to Kyushu, Shikoku is also suitable for the growing of similar crops, whilst the north of the island is a popular fruit growing area. One of the more unusual features of Shikoku is that, unlike the other main Japanese islands, Shikoku has no volcanoes within its boundaries. This is seen by some as unusual in such as seismically active area.

The Japan Page in